Good news, after a considerably stressful couple of weeks, and in particular the last two days, I’ve managed to get hold of the second main character model for my project. On top of that, the facial rigging setup which I have not yet had to tackle loomed large. I had a go two days ago, trying to get the first model done, for some peace of mind for when the second one arrived, unsuccessfully. It’s a notoriously difficult element of rigging and frankly light years away from my knowledge. However, some months ago my excellent mentor Amedeo Beretta mentioned that the rig setup I use for the bodies can also be used for faces which got me thinking…..

After a long night and tricky couple of hours at work, I slept on it and figured it out, also a tutorial set me on the right path.  Here’s the new model – 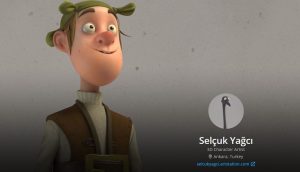 What a beauty hey. It’s been quite a slog getting this stage into a comfortable position that I can confidently move on from.

In terms of the rigging process, here’s the tutorial that describes the process of setting up the facial rig, the reasons it wasn’t working previously was due to ‘old’ junk lying around in the file which I deleted the history from, or it was due to not filling in ALL the pre and fit parameters. Anyhow, things to keep in mind, for the ‘extra’ section at the end of the pre facial build, I simply used a small ball in the middle of his head, an invisible anchor….

Make sure you fill all these in!! 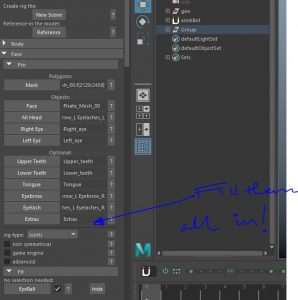 You can see from the header image that I’ve still got a fair way to go, the textures are mostly non existent as it was an old model that Selçuk Yağcı sold me, I suspect that he redid the face before he sent it later than expected, as all the other textures are absent. My next learning curve will be to produce some good looking textures, in an ideal world I’d love to work in some  xgen hair system and/or some ncloth simulations too, alas I feel that may be for another day.

Onto the blocking out next 🙂