After mulling over this module for a few days, my first decision was made quite quickly as I knew which rig I want to use, this lovely beast from Truong. He’s a lovely mix of simplicity and character, lots of great shapes and expression. 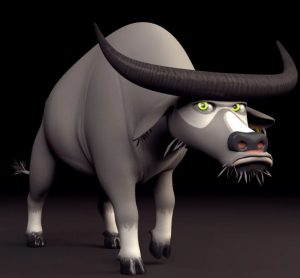 The idea I shall be pursuing is freedom of sorts; the ox will be dragging a plough/series of objects, manage to break free then jump around in jubilation. There should be lots of fun to be had in putting his energy to good use, I’m looking forward to having him really stretch in the pulling then feeling light and bouncy when freed, and transforming the grumpy jowls into a face of jubilation. One thing that I need to be really mindful of is simplicity, my tendency to over complicate must be kept at bay and just enjoy the raw animating.

For the storyboard I’ve tried to keep it in the spirit of the emotional thrust, in that his face will be a key part in trying to show his reactions and hence the story unfolding more easily. 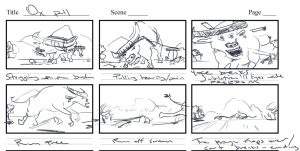 For timing, I put together an animatic that follows the idea along.

The next step was to test the rig, I used the run cycle in Richard Williams’ book to create this, he’s a relatively straightforward rig without too many difficult controllers, and as he’s made by Truong who uses the AS setup, I’ve got some understanding of the mechanics already. The animation here is just a test 🙂

For some early research I spent some time looking around at the associated imagery of farming with oxen. Large parts of the world still have much of their ploughing and heavy lifting and transportation carried out by them. And of course in India there are religious aspects associated with them, I quite like this aspect as the decorated and loosely magical aspect adds some visual ingredients. Here’s some imagery that started to give me a flavour- 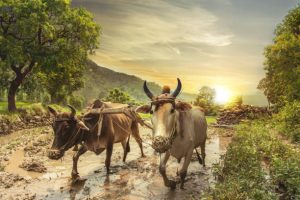 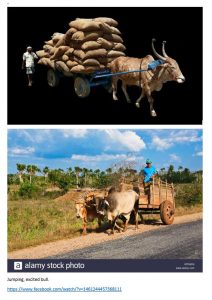 These images all started to suggest to me that it may be better to use a cart, rather than a plough for the ox’s burden, it can also be animated and add some further character and widen the possible environments away from a simple field maybe.

After developing a feel for the rig and character I started to research the video footage that I would be using; as my piece would be more of a comedy/entertainment piece, rather than a straight realism piece it required alot of different pieces of footage that jigsawed together to fulfil the whole narrative – obviously I couldn’t find some real ox footage that encapsulated all my needs! The videos I used came from bull runs in Spain, American ox pull competitions, American rodeo’s, homespun farming stories and some footage from an animated film called Ferdinand. The latter has given me a huge respect for feature film creature animators, the complexity and sophistication of the movements/weight/physics and characterisation is quite incredible when really scrutinised. So here’s a video that shows and explains what I used –